Oil and Gas—Largest Single Source of Tax Funding in State 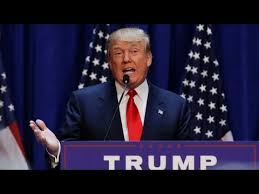 In unveiling his energy specifics on Thursday, Donald Trump said America is sitting on a treasure trove of untapped energy. And he said if he’s elected President, he will end the war on coal and eliminate the EPA’s Water of the U.S. rule. He also made a point to thank Oklahoma energy mogul Harold Hamm.

He delivered his energy speech in Pittsburgh at the Shale Insight Conference, saying, “Producing more American energy is a central part of my plan to Making America Wealthy Again—especially for the poorest Americans.”

“I also want to thank the Marcellus Shale Coalition, the Ohio Oil and Gas Association, and the West Virginia Oil and Natural Gas Association for inviting me to join you here today. Your organizations represent tens of thousands of jobs for hardworking Americans. Let me also recognize my friend, Harold Hamm.”

Trump vowed to lift the restrictions on American energy, including shale production, a move he claimed will add more than 500,000 new jobs a year. He said it would increase annual wages by more than 430 billion over the next seven years and at the same time, would increase federal, state and local tax revenues by nearly $6 trillion in four decades.

In veiling the plan, trump criticized Hillary Clinton for wanting to put coal miners out of work, banning hydraulic fracturing in most places and restricting and banning energy production on public lands.

“This will produce devastation for states like Pennsylvania, Ohio, and West Virginia, where shale energy and coal production are critical parts of the economy. Her plan hurts states like Colorado, Florida, Virginia, North Carolina, and any anywhere with access to either onshore or offshore energy resources,” said Trump.

He charged that Clinton’s plan and war on energy will cost the US economy $5 trillion.

“She has not only declared war on the miners but on oil and natural gas production—which supports 10 million jobs in the United States,” said Trump.

He promised to end the war on coal and rescind the coal mining lease moratorium.

“We will eliminate the highly-invasive “Waters of the US “rule and scrap the $5 trillion Obama-Clinton Climate Action Plan and the Clean Power Plan. I will refocus the EPA no its core mission of ensuring clean air and clean, safe drinking water for all Americans,” said Trump.