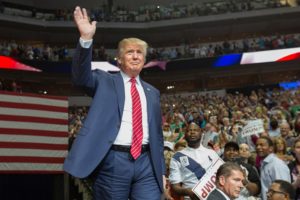 With a massive crowd expected Saturday in Norman for the football game between OU and Ohio State, Donald Trump will bring his Presidential campaign to the city.

But OU President David, a longtime Democrat makes it clear, he has not and will not issue a personal invitation to Trump to attend the afternoon game. It’s what he said this week at the OU Board of Regents meeting in Claremore.

Exactly where the Trump fundraiser will be held has not been publicly announced.  But it will be hosted by Gov. Mary Fallin and Continental Resources CEO Harold Hamm.

Could be a tight schedule for Trump to attend the game, even if he were to be invited. He already has a 1 p.m. event in Houston prior to his stop in Norman, and a 7:30 p.m. event in Colorado Springs, Colorado afterward.