Political Spending by Utilities Under Investigation in Arizona 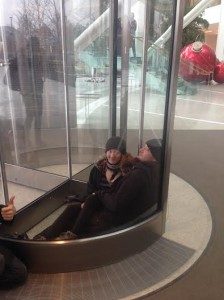 Two environmental activists were acquitted this week on charges stemming from a December 2013 protest demonstration at the Devon Energy headquarters in downtown Oklahoma City.

Chief Municipal Court Judge Phillipa James announced not guilty verdicts in favor of Moriah Stephenson and Stefan Warner who had been arrested and charged originally with Terrorism Hoax felonies. The charges were later dropped and the two were accused of disorderly conduct.

The terrorism hoax charges stemmed from the glitter that fell from a banner hung in the atrium of the 50-story tall Devon Tower. The banner stated “The Odds are Never in Our Favor.”

Stephenson and Warner belonged to the group Great Plains Tar Sands Resistance and Cross Timbers Earth First and locked themselves in a revolving door entrance to the building.

The two argued last month in their misdemeanor trial their actions were protected free speech. Judge James found the two had engaged in political protest. The judge also ruled evidence indicated there was no “public alarm” caused by the protest activity.

“Our intent was to highlight that the odds are never in our favor, our being the people’s favor,” said Stephenson. “The purpose of the demonstration was to raise awareness about Devon Energy’s involvement in tar sands extraction and the environmentally racist nature of tar sands extraction.”