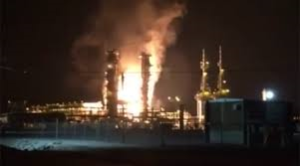 Only two workers were on duty at the time, according to Earl Etheridge, the Jackson County Emergency Manager. The blast happened about 11:30 p.m. Monday and was followed by another that could be felt 10 miles away from the plant near Pascagoula.

The plant previously was owned by BP but recently a sale was completed to Enterprise Products.  Enterprise had earlier owned 40 percent while BP owned 60 percent of the operation.

Pascagoula is about 30 miles east of Biloxi, Mississippi and takes in offshore natural gas and processes it to be shipped by pipeline.