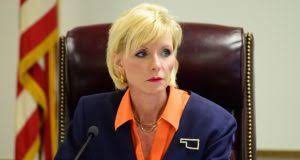 Corporation Commissioner Dana Murphy offered a tearful farewell in her last meeting on Thursday, saying she hoped her legacy was to the people.

After 14 years as a commissioner, Murphy concluded the commission’s meeting with comments as she was term-limited on the state-wide seat.

“I can’t say enough about you,” she said in comments directed toward the commission staff.

“I hope the legacy that I’ve left is that diplomacy always works, and that being a stateswoman can work at any time,” said Murphy as she paused and sniffled during her closing comments.

“I hope the legacy I left is devotion to the people,” she added.

Murphy leaves as chairwoman of the 3-member commission and will be replaced by former Sen. Kim David who won the election last fall.