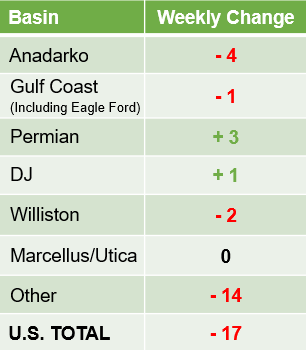 This week’s rig count from Enverus Foundations showed a major decline of 17 rigs, as the nation’s total number of oil and gas rigs slid to 860 as of the week ending Dec. 14.

That includes a decline of four rigs in the Anadarko Basin leaving 87 in operation. The Williston Basin in North Dakota and Montana fell two to 41. Enverus reported Appalachia was flat at 56 rigs.

Increases were recorded in the Permian and the D-J Basins. The Permian gained three rigs to 325 while the DJ Basin added one for a total of 21.