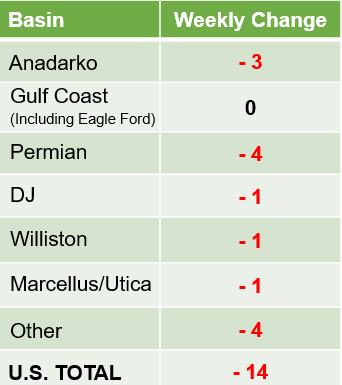 A new rig report from Enverus Foundations indicated a drop in the number of oil and gas rigs actively seeking new energy in the U.S.

Enverus reported the nation’s rig count dropped by 14 for the week ended Nov. 30.  The total of 873 active rigs is down 2% from a month ago, but up 26% YOY. All numbers discussed are weekly peaks to avoid the sometimes wide variability of daily numbers.

In major plays, declines were seen across the board, except for the Gulf Coast, where the total of 121 was flat week over week and marked a 2022 high.

The Permian count fell by four rigs to 319, and the Anadarko Basin fell by three to 88. Drops of one rig each were seen in the Appalachian Basin (56), DJ Basin (20) and Williston Basin (40). Notably, the Permian count is down by 15 rigs over the last month.