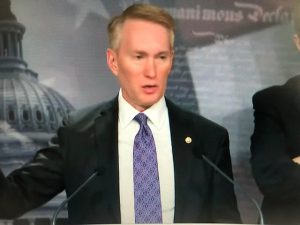 In his recent newsletter issued on Tuesday, Oklahoma Sen. James Lankford updated constituents on many issues involving the energy industry. Some of these relevant issues include:

Lankford revealed the Senate voted on the 750+ page bill for more than 24 hours this past Saturday and Sunday. He denounced the $750 billion bill as an economic wrecking ball that will “drive up the cost of energy, reduce cancer drug innovation and make our economy even worse.” Lankford stated the bill would result in decreased healthcare access for seniors and punishing taxes on small businesses while increasing frequency in IRS audits and providing new tax credits and subsidies for electric vehicles. During the debate, he offered two amendments to the bill. The first amendment dealt with increased law enforcement at the southern border. The second amendment would fix the huge tax increase on some independent oil and gas companies which will drive up costs of fuel and reduce hiring with energy companies. Both of the Lankford amendments failed.

Lankford reported the Senate passed the PACT Act to give healthcare access to veterans who are victims of toxic burn pits or Agent Orange. While Lankford expressed support for helping veterans, he advised that the PACT Act will increase the VA backlog and accused the Democrats of stuffing the bill with $400 billion in new debt spending that is not related to veterans.

Crisis at the Southern Border

Lankford toured the Rio Grande Valley with a delegation of Senators in July and met with officials from the Oklahoma Bureau of Narcotics upon his return home. He is concerned about the OBN reporting a sharp rise of illegal drugs flooding into Oklahoma from Mexico over the past two years since enforcement was dropped. Drug cartels traffic humans across the border and force them into a life of crime to work off their debt. He would like to see more enforcement action on the part of the Biden Administration rather than falling on deaf ears.

Lankford introduced a solution to establish a universal application across federal agencies for disaster survivors who are seeking federal assistance to recover from hurricanes, floods, wildfires and other disasters. He would like to see this process streamlined and become more efficient to reduce the burden on disaster survivors.