Nation’s oil and gas rig activity on the increase 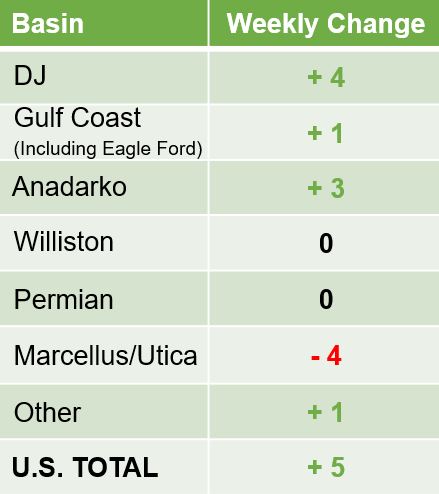 The number of rigs running in the U.S. rose by five in the last week to 826 as of July 13, according to Enverus Foundations data.

The count is up 2% in the last month and up 56% YOY. The count reached as high as 836 in the last week, an increase of four rigs over the prior week’s peak.

The Gulf Coast added the most rigs on a peak-to-peak basis in the last week with four more rigs bringing its total to a 2022 high of 118. The last week’s DJ and Permian peaks of 22 and 309 were each up by two from the previous week’s high points. The DJ hit a 2022 high, while the Permian is seven rigs off its YTD high recorded May 22 and is the only basin that hasn’t notched a new high in July.

Three basins had declines in their peak rig counts last week compared to the prior week: the Appalachian dropped by four to 56 rigs, the Williston was down by three to 42, and the Anadarko was down by two to 73.