OGE board announces dividend and addition of new director 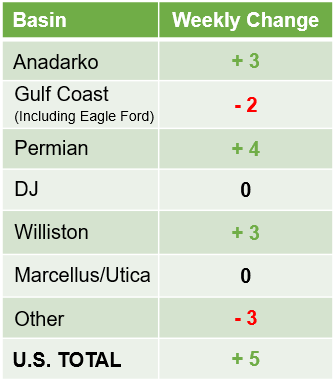 The latest rig count by Enverus Foundations showed not only a nationwide gain but increased activity in the Anadarko Basin.

Enverus reported the Anadarko saw a gain of 3 rigs in the past week to reach a total of 91. Nationally, it showed a gain of 5 to reach 877 total rigs.

The count is down 1% in the last month but up 28% YOY. All numbers discussed are weekly peaks to avoid the sometimes wide variability of daily numbers.

The Appalachian and DJ basins were flat at 56 and 20 rigs. The Gulf Coast lost two rigs and now has 119 running.