U.S. natural gas exports to Mexico are increasing at the West Texas border

Mullin hosts panel on the importance of American energy independence 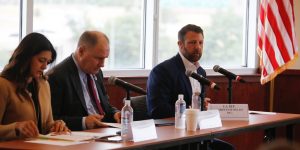 Congressman Markwayne Mullin (OK-02), member of the House Permanent Select Committee on Intelligence, moderated a panel Wednesday on the importance of American energy independence and its direct correlation to our national security.

The discussion focused on how our nation’s adversaries use energy access as a threat, and how American exports will pave the way to global stabilization.

“The purpose of this meeting is to highlight the strategic risks we have when the United States is not a net exporter,” Congressman Mullin said in his opening remarks. “As I like to say, U.S. energy independence brings on global stabilization. We are able to set markets, we are able to participate in other countries who want to do business with the U.S. when we are energy independent.”

Following opening remarks, each panelist assessed and unpacked the implications of American dependence on foreign adversaries like Iran, the current roadblocks our producers are facing from this administration, and how energy independence is one of the most important solutions in strengthening our nation against threats from any foreign adversary.

The panelists also discussed Europe’s reliance on Russian gas imports and the lessons we can learn from Europe’s resulting vulnerabilities following their rush to green. 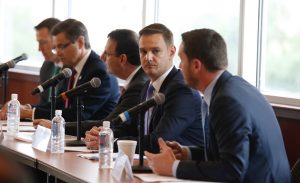 “You can look at what’s happened in Europe over the past couple of years,” Congresswoman Bice told the panel. “It is a prime case of what not to do. They are very reliant on other countries and adversaries, including Russia, and the results are devastating.”

When discussing what led to the loss of U.S. energy independence, panelists noted Biden’s Executive Order to halt the sale of oil and gas leases on federal lands and the increased regulation that has made it near impossible for our producers to complete energy infrastructure and safely transport product.

“How do you know what the rules of the game are when they are changing on a regular basis?” Luke Essman, President and CEO of Canyon Creek Energy asked. “One day you have a set of plans, the next day the rule changes and we are required to change with them,” he continued.

The panelists were in agreement that Joe Biden and his Democrat party’s assault on domestic production is all part of their Green New Deal agenda to eliminate fossil fuels completely in the name of “clean energy.” The members said domestic producers are incredibly innovative, however, and did not need burdensome regulation from the Washington bureaucracy to become the world leader in lowering carbon emissions. For example, for every ton of emissions reduced by the U.S., China increases their emissions four times over.

“Our industry has taken a tremendous amount of advancement in clean energy because it is the right thing to do,” Blu Hulsey, VP of Government Affairs for Continental Resources told the panel.

Other industry leaders agreed, citing the need to capture every bit of the resources they are producing as not to waste product.

“It’s not a choice between climate and fossil fuels,” Congressman Kelly reminded the audience. “It’s not binary.”

There was no question to America’s ability to provide reliable and secure energy to power our nation or the threats our country could face should we not get there.

This panel was held in conjunction with the House Intelligence Committee’s “Beyond the SCIF” Series. Beyond the SCIF is an effort by Ranking Member Mike Turner and the House Intelligence Committee Republicans to connect with experts and leaders in the national security field to create an open dialogue on threats facing our nation and what committee members can do to counter the malign actions of our adversaries.

A full recording of this panel can be found here.