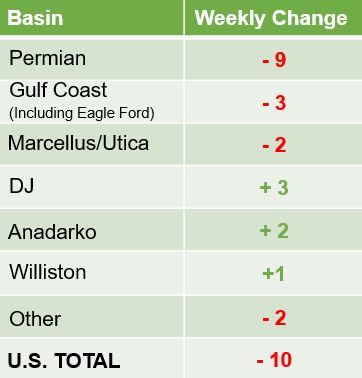 The latest rig count released by Enverus Foundations shows an increase of two in the Anadarko Basin which spreads across western Oklahoma and into the Texas Panhandle.

The basin was one of a handful that saw gains in the number of active oil and gas rigs. Overall, the U.S. rig count fell by 10 over the past week, settling at 816 as of June 29 according to Enverus.

The Anadarko, DJ, Gulf Coast and Williston basins all hit multi-year highs at 74, 21, 118 and 44 rigs, respectively. Neither the Anadarko Basin nor the Gulf Coast has had this many rigs since 3Q19. The Williston Basin is at its highest activity level since the end of 1Q20.

In a peak-to-peak comparison, no major plays saw a change of more than two rigs from the prior week except for the Permian, which was down by five.

Despite the national week-over-week drop, the count reached as high as 833 during the week, its highest activity level in almost two and half years and a five-rig increase from the prior week’s peak.