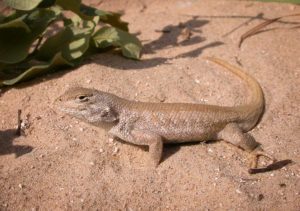 Leapin’ lizards! A native southeastern New Mexico species is the center of controversy when a lawsuit was filed last week alleging the federal government failed to protect the dunes sagebrush lizard from extinction.

Native to the Permian Basin area and west Texas, the lizard dwells in sand dunes around the region, which are mined by the oil and gas industry during the fracking process.

The Center for Biological Diversity announced its intent to sue the U.S. Fish and Wildlife Service last year for failing to act on a 2018 petition demanding protected status for the lizard as endangered of threatened under the Endangered Species Act. The Center made good on its notice by officially filing its lawsuit on May 19.

“We won’t stand by while the last dunes sagebrush lizards disappear,” said Michael Robinson, senior conservation advocate at the Center. “Even as the oil and gas industry ruins our climate, it’s also destroying the lizards’ last homes. Protection under the Endangered Species Act is this unique animal’s last hope.”

Robinson said threats to the dunes sagebrush lizard showed that oil and gas’ environmental impacts go beyond pollution and damage its habitat through drilling operations, pipelines and mining.

“Dunes sagebrush lizards are perfectly adapted to their shinnery oak dune habitats, but they won’t survive the oil and gas industry without protection,” said Robinson.

In 1982, the U.S. Fish and Wildlife Service found the lizard was likely in need of protection but its decision was delayed. The Center submitted a petition in 2002 and the federal governmental agency proposed it should be listed eight years later in 2010. Although landowners and other governmental agencies made agreements to protect some of the lizard habitats in Texas and New Mexico, the proposal was never formalized.

Those entering the agreements could be landowners or users in the oil and gas or agriculture sectors that hoped to continue development while also protecting the animal and avoiding an ultimate listing. CEHMM reported the agreements could entail moving oil and gas wells out of lizard habitat, according to a recent published report in the Carlsbad Current-Argus.

CEHMM’s records show 503 wells on federal land were moved out of lizard habitat since 2009, while 84 were moved off state land and 92 rights of way were relocated.

Those enrolled in the agreements agreed any future wells or developments would not be located within 30 meters of areas deemed habitable by the lizard.

“Construction of well pads and roads for oil and gas development poses a serious threat to the (dunes sagebrush lizard) because of its dependence on a very specialized, dynamic habitat,” according to the report.

A project to restore lizard habitats was funded in 2019 for about $43,000, per the report, removing caliche, a sedimentary rock, from an approximate three-mile oilfield road no longer in service and a 0.6 acre well pad. It was planned to be completed this spring with funding through a ConocoPhillips grant.

“These are legacy wells with no responsible party,” stated the report. “Since roads made from caliche cause habitat fragmentation, these removal efforts will improve habitat for the (dunes sagebrush lizard).”

CEHMM also funded a project in March for about $67,000 to remove about 2.5 miles of fencing from property that could be used for lizard habitat as well as the lesser prairie chicken, another species being sought for protection.