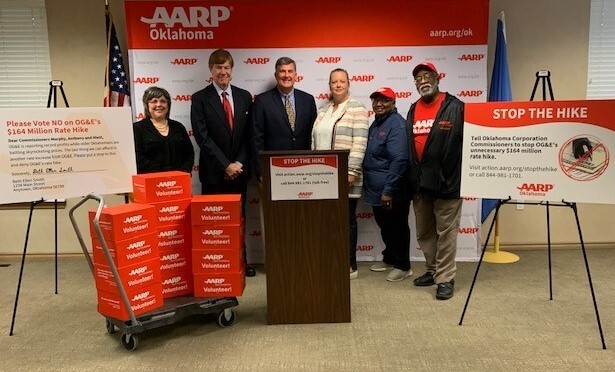 Just as promised this week, the AARP sent nearly 7,000 petitions to Oklahoma regulators in protest of the $164 million rate hike proposed by Oklahoma Gas and Electric Company.

The hike would mean an average $10 a month boost in the bill of a typical residential customer.

The AARP organized the protest of postcards that were delivered Tuesday to Corporation Commissioners Dana Murphy, Todd Hiett and Bob Anthony. 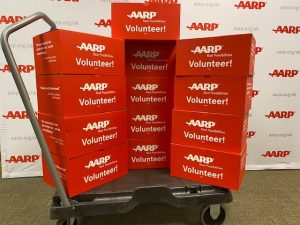 Voskuhl said customers cannot afford back-to-back rate increases.  The corporation commissioners granted an OG&E rate increase in December 2021. And, Voskuhl said OG&E reported soaring profits of $1.52 billion in 2021 and in the first quarter of 2022, reported a profit of $279.5 million.

Voskuhl, AARP Oklahoma State President Jim Randall and AARP Oklahoma volunteers reported petitions came from all across the state and the team worked to ensure they were made part of the public record for commissioners Murphy, Hiett and Anthony to review.

Voskuhl said many postcards have handwritten notes pleading for commissioners to deny the rate hike. “Our hope is the commissioners will look through the petitions and fully understand the magnitude of their decision should they choose the wants of OG&E over the needs of everyday Oklahomans,” he said.

Randall, an OG&E customer, said he stands with the thousands of Oklahomans telling Corporation Commissioners Murphy, Hiett and Anthony, “Enough is enough.”

He said Oklahomans watch every penny as food, medicine and gas prices climb. “No doubt Oklahomans, especially those on fixed incomes, will have to make difficult decisions,” Randall said. “People I know have told me they would have to choose between food, medical care or paying ridiculous utility bills.”

“I find the back-to-back rate hikes unconscionable as OG&E profits off the backs of hard-working Oklahomans.” he said. 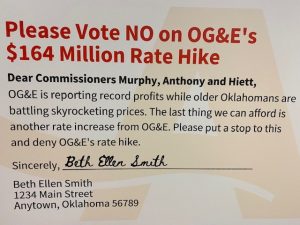 AARP Oklahoma utility attorney Deborah Thompson said the rate case begins on June 14 before the corporation commission to hear the OG&E $164 million rate case. In addition to opposing the overall rate increase, AARP is fighting OG&E’s attempt to implement so-called performance based rates. AARP also opposes OG&E’s plan to shift more of a residential customer’s bill to a fixed charge, which is the amount charged before you even flip on a light switch.

Voskuhl and Randall urged OG&E customers to tell Corporation Commissioners Murphy, Anthony and Hiett to stop the OG&E rate hike and instead figure out a way to lower customer bills. AARP’s analysis shows that based on current collections customers are due at least an $18 million rate decrease.

Oklahomans can make their voices heard and tell the corporation commissioners to deny OG&E’s $164 million rate hike by visiting  action.aarp.org/stopthehike to email or calling (toll-free) 844-981-1701.

You can watch the press conference on the AARP Oklahoma Facebook page.