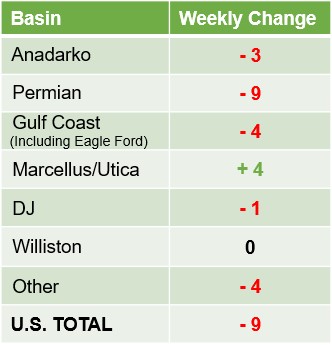 The largest week-over-week declines by region were in the Permian (minus nine to 266), Gulf Coast (minus four to 82) and Anadarko Basin (minus three to 64). The Appalachian Basin reached its highest activity level since October 2019, gaining four rigs during the past week for a total of 53.

There are currently 27 companies drilling wells in Appalachia, compared to 16 operators at this time in 2021. Fifteen of those companies are running multiple rigs, with Ascent Resources and Tug Hill Operating being the most active at four rigs each.