Luminant to close East Texas mine

Rig count gained in US but dropped in Anadarko Basin 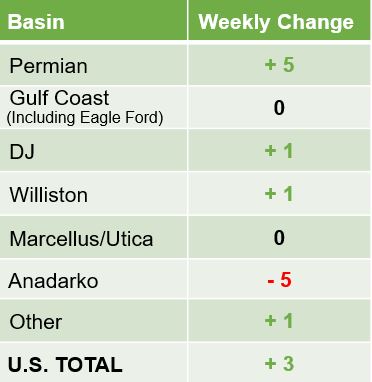 The weekly U.S. rig count provided by Enverus Rig Analytics showed a national increase of 3 to 659 rigs while rig operations in the Anadarko Basin of Oklahoma declined.

The Anadarko Basin had the largest loss, dropping five rigs to a total of 51.
No operators in the Anadarko gained or lost more than one rig. Of the 11 companies that dropped a rig week over week, nine were only running one rig to begin with. Conversely, all six operators that added a rig were inactive in the play the previous week according to Enverus.

Nationally, the count is up by more than 3% in the last month and 76% in the past year. The nationwide count of 659 is just below the year to date high of 662 which was reached earlier in the week.

The most active operators in the U.S. are currently Pioneer Natural Resources with 25 rigs; EOG Resources with 22; Mewbourne Oil Co. with 18; Continental Resources, ConocoPhillips and Devon Energy with 17 each; and Occidental Petroleum with 16.

In the Permian, Mewbourne was the only operator to add more than one rig over the last week. The company brought on three rigs, increasing its Permian total to 16 and overtaking Oxy as the second-most active operator in the play. Quantum Energy Partners-backed Rio Oil & Gas II dropped both of its rigs in the Permian and was the only company to drop more than one.