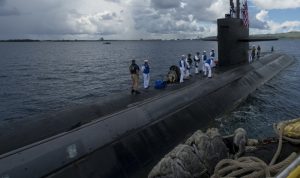 The USS Oklahoma City submarine made its final voyage last Monday night through the frigid waters of Puget Sound, where it will be scrapped following a 33-year career in the U.S. Navy, according to a news report published by the Kitsap Sun.

Navy tugboats maneuvered the aging sub to mooring lines tied by shipyard workers at a Naval Base Kitsap-Bremerton pier, not far from the USS Nimitz aircraft carrier. More than 130 decommissioned naval nuclear-powered submarines have been dismantled at the shipyard.

The Navy is more than halfway through retiring its fleet of Los Angeles-class fast-attack submarines, like the USS Oklahoma City, and replacing them with the newer Virginia class.

For around the past 10 years, the 1988-commissioned USS Oklahoma City has been a part of the Guam-based Submarine Squadron 15, which includes the USS Asheville and USS Key West. After a stop in Pearl Harbor, the 361-foot vessel proceeded to the colder climate of the Pacific Northwest.

Demands on the Navy’s shipyards continue to mount, according to the news report. Both the USS Connecticut, en route after striking an underwater mountain in the South China Sea, and the USS Nimitz aircraft carrier, which encountered problems in the ship’s propulsion plant, are in need of urgent repairs. There’s pressure to ensure ship inactivation, decommissioning and recycling goes as smoothly and swiftly as possible.

In a first, the Navy has been using what’s called an “Alternate Inactivation Construct” for the old boats that allow for a quicker process and transition of the sailors on to their next assignments. The USS Jacksonville, among the boats going through that process, completed decommissioning in a record 127 days after docking.

Following decommissioning, it can be years before the subs return to dry dock to be cut up and fully recycled. Years from now, all that will be left of the USS Oklahoma City is an empty nuclear reactor compartment, which will float out of Puget Sound and up the Columbia River to the Department of Energy’s Hanford site, where it will remain for the next 1,000 years.