Manufacturing slowdown in Oklahoma and nearby states

Enverus reports rig count is down in US 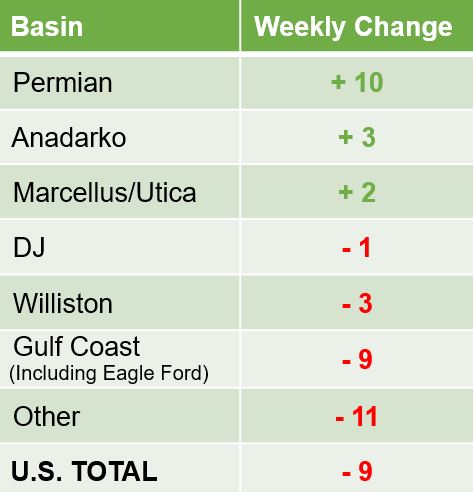 The number of oil and gas rigs running in the U.S. fell by nine in the last week to a total of 653 as of Nov. 17, according to Enverus Rig Analytics.

At the same time, the weekly report showed a slight uptick in drilling activity in Oklahoma’s Anadarko Basin. Enverus stated there was an increase of 3 rigs.

Nationally, the count is up 0.6% on the month and up 73% on the year. The most notable week-over-week changes occurred in the Permian, where the addition of 10 rigs brought the total to 263, and the Gulf Coast, where the nine-rig decline brought the tally to 75.

The number of rigs operating in the Permian Basin has hit a high not only on a YTD basis but for the last 19 months, although it is still off 133 from the 2020 high, from March 10 of that year.

Discovery Natural Resources is running a two-rig program for the first time since 2019. At 14 rigs, EOG’s drilling activity is its highest so far this year.