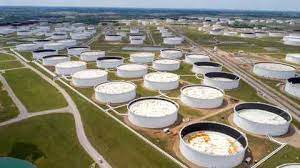 The U.S. Energy Information Administration is out with its crude oil forecast for 2022, suggesting the demand that caused lower inventory levels in Cushing and elsewhere and higher crude oil prices will swing dramatically in the coming months.

“We estimate world crude oil consumption exceeded crude oil production for five consecutive quarters, starting in the third quarter of 2020. During this period, petroleum inventories in OECD countries (the Organization for Economic Cooperation and Development) fell by 424 million barrels, or 13%. We forecast global crude oil demand will exceed global supply through the end of the year, contribute to some additional inventory draws, and keep the Brent crude oil price above $80 per barrel (b) through December 2021,” stated the EIA in a release on Thursday.

It went on to forecast that global oil inventories will begin building in 2022 because of slowing growth in global oil demand.

“We expect this shift will put downward pressure on the Brent price, which will average $72/b during 2022,” predicted the EIA.

The futures markets are similarly showing high prices for near-term contracts compared with longer-dated contracts, a situation known as backwardation. Crude oil inventory levels, among other factors, affect the difference between near-term and longer-term futures prices. Differences in prices between crude oil contracts for delivery in the near term compared with contracts for delivery at later dates indicate market expectations that inventory draws will moderate.

Low crude oil inventories in the United States—particularly in the transportation and storage hub of Cushing, Oklahoma, where NYMEX WTI futures contracts are physically settled—have likely contributed to additional backwardation in WTI compared with Brent.

The EIA’s Weekly Petroleum Status Report showed crude oil inventories in Cushing were 26.6 million barrels on November 12, which was 49% below the previous five-year average and 32% of the working storage capacity.