Data from the most recent Oklahoma Energy Index (OEI) show every index component except for crude oil spot price has moved higher from one month ago. Rig activity is climbing and is taking employment along with it. Natural gas prices have spiked as market conditions, especially in Europe, remain very tight.

The combined influence of prices, employment, and rig activity led the Oklahoma Energy Index to move 2.4% higher for the month and is now up 25.8% for the year. The Energy Index now stands at 102.8. 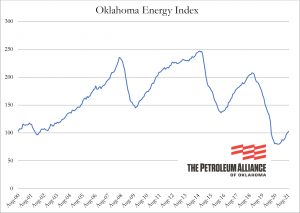 Economist Dr. Russell Evans who compiles the Energy Index said both state GDP and non-farm employment remain below pre-pandemic levels and likely won’t fully recover those losses until late 2022 or 2023. However, the state’s oil and gas industry activity is providing a source of real and foundational strength to state economic activity. Importantly, the pace of recovery is quickening as much-higher-than-expected prices, a lingering optimism in the outlook for energy demand, and an-as-yet-unmoved OPEC+ production target combines to suggest a favorable future price path.

“For now, Oklahoma is enjoying strength in its core industry, but future swings in activity are possible,” said Evans, director of the Steven C. Agee Economic Research and Policy Institute. “At the very least, the state will get its first observations on what might be our new normal levels of oil and gas activity at various price points.”

Petroleum Alliance President Brook A. Simmons welcomed the boost in activity but said the immediate future of the state’s defining industry could be determined on Capitol Hill. In Washington, D.C., lawmakers are currently debating an infrastructure and social spending plan that is touted by the Biden administration as a transformative economic stimulus. However, proposals for the legislation include significant tax increases on the oil and natural gas industry to fund alternative energy investments. 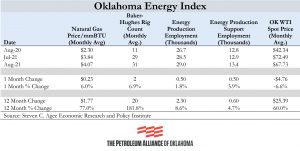 “The extent to which the spending package is a net economic stimulant depends on both the size of the bill and the composition of tax policies adopted to finance it,” Simmons said. “If the goals of the Biden administration are met, the increased taxes on the oil and natural gas industry in the form of methane taxes and carbon taxes could have a chilling effect on Oklahoma’s oil and gas industry and the state’s economy as a whole.”

The OEI is a comprehensive measure of the state’s oil and natural gas economy established to track industry growth rates and cycles in one of the country’s most active energy-producing states. The OEI is a joint project of The Petroleum Alliance of Oklahoma and the Steven C. Agee Economic Research and Policy Institute.