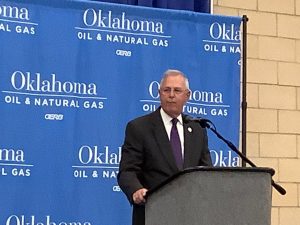 On the day President Biden asked energy companies to lower their prices, one Oklahoma leader was critical of the administration for its anti-oil and gas policies.

“There’s consequences for the actions of the Biden administration,” said Secretary of State Brian Bingman in an interview with reporters after he spoke at the SOER Oil and Gas Expo at the State Fairgrounds.

“I don’t think they’re well thought out and they just kind of throw these out at the industry. I think there’s going to be some long term effects on the Oklahoma economy on what the Biden administration’s doing.”

Bingman told the crowd there are obvious hurdles and challenges ahead for the industry and later explained to OK Energy Today, one of those hurdles is uncertainty in oil and gas.

“There’s still probably hesitation in the oil and gas industry about spending new dollars on exploration and production. When you don’t know what’s gonna come down, there’s no certainty in the business,” said the Secretary.

“So the Biden administration I guess is creating so much uncertainty in the industry—that’s probably why you see a lot of the spikes in the prices, shortages and transportation issues. People don’t want to commit on the dollars when you don’t know what’s headed down the road,” said Bingman.

When asked whether oil and gas companies should comply with Biden’s request to lower prices, Bingman said it’s a free market “and we love the competition.”

‘With all the volatility and world wide countries with what’s going on, it’s so important now that we maintain our production and sustain our energy independence. If we become dependent on foreign countries, then it would put things out of our control.”

He was critical of Biden’s first-day executive order to shut down work on the Keystone XL pipeline.

“When you shut off those pipelines, that oil still has to be transported and you’re either going to do it by rail, by trucking–again that’s expensive and increases costs to consumers. Pipelines keep prices competitive. With the Biden administration, any price increase is going to be passed along to the consumer.”