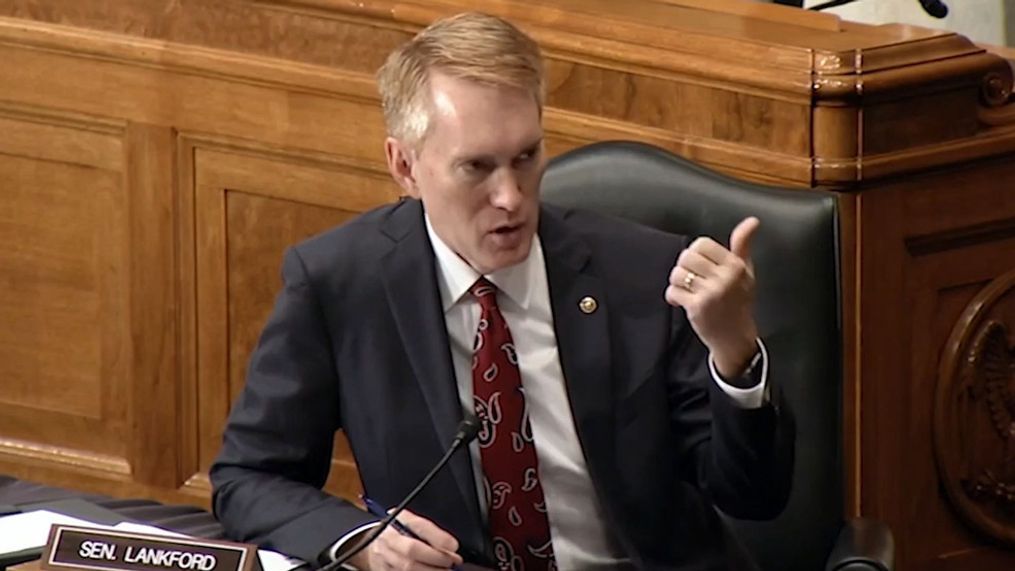 Oklahoma U.S. Sen. James Lankford continued his pressure to highlight the Biden administration’s efforts to “cancel” US energy and innovation under the “climate-change prevention banner”, doing so during a Senate committee hearing on updates to US mining laws. He used it to urge steps be taken to stop supporting China.

While the Republican Senator has criticized Biden during Senate floor speeches and the Democrats’ “tax-and-spend spree” and how it hurts the US energy industry and US innovation, this time he raised the same questions during a Senate Energy and Natural Resources hearing examining and considering updates to the 1872 Mining Law.

Members of the committee also came out in opposition of House Democrats’ attempt to change mining law through a partisan budget process. The ENR committee members’ remarks were during a full committee hearing to examine and consider updates to the Mining Law of 1872.

Ranking member Sen. John Barrasso argued the president and the House Democrats only want to make it more difficult to get to the minerals the nation needs.

“And they seek to eliminate all mining on federal lands. Last month, House Democrats advanced partisan budget legislation –their reckless tax and spending spree – that would impose punishing royalties on existing and new mines on federal land. House Democrats also plan to raise fees and impose a tax on mining firms,” charged Barrasso.

“The fees are based on the amount of dirt they moved. You can’t make this stuff up. House Democrats are planning to tax dirt.”

Lankford’s questions focused on the ways Biden’s policies on US domestic mineral development as well as ways the long US permitting process for mines, which can take up to 10 years, is deterring US investment in rare earth and critical minerals and encouraging dependence on China.

Lankford has called them “misguided policies” and hopes to offset them through a bill he introduced last spring to improve the timeliness of federal permitting and review processes for mineral production on federal land.

Lankford has urged support for attempts to bring the mineral supply chain back to the U.S. and to raise the issue of extremely slow federal permitting processes across in the US. Lankford highlighted that one power transmission line has taken 14 years to permit.

Lankford: When we talk about the United States and our own mineral development here, and we look at other countries, whether it be in Asian or in Africa or in South America and other places, is there anything distinctly different about our geology that we shouldn’t be able to go after some of the minerals that are here? In other words, we know there’s the presence of some of the minerals here, but is there something unique about our geology that would say China has that mineral—we have that mineral—but really China should develop that mineral, not us. Or South America has that mineral—we have it—or Australia has it and we have it. I know geology is different. It’s not always the same depth. It’s not always the same economical use, but is there something about our geology that we would say, if the minerals here and there, we should just get it there instead of here?

Haddock: …The United States is a vast land that is blessed with a great mineral endowment. And because of that, I think it’s important for us to continue to explore for every kind of mineral. And the one thing I can tell you in our industry is the technology is always advancing and the ability to find things that are covered and find mineral deposits that we couldn’t have found before is always evolving.

Lankford: Ms. Sweeney, in your testimony you mentioned that permitting for a mine can take seven to 10 years, am I reading that correctly?

Sweeney: If you’re lucky, if it’s a major, major mine, yes.

Lankford: So here’s what interesting. Obviously if you go to Canada, or if you go to multiple other countries, Australia, it doesn’t take seven to 10 years to do the permitting on that. What does it take in other places?

Lankford: So this is the interesting thing, when I’ve talked to several different folks that are going after rare earth minerals in different parts of the country, they will say, ‘Yes, I know where they are. Yes, I know the permitting process, but the unpredictable wildcard about this are the lawsuits that can come in, that they just trickle in one after another after another after another that even after I have the permit or I’m nearing the permit closure, it is still unpredictable.’ So their statement is, ‘I’m not going to invest millions of dollars in capital to go do all that has to be done to have it drug out 20 years and my capital dry up and a whole series of lawsuits on it. Is that right or wrong? How common is that?