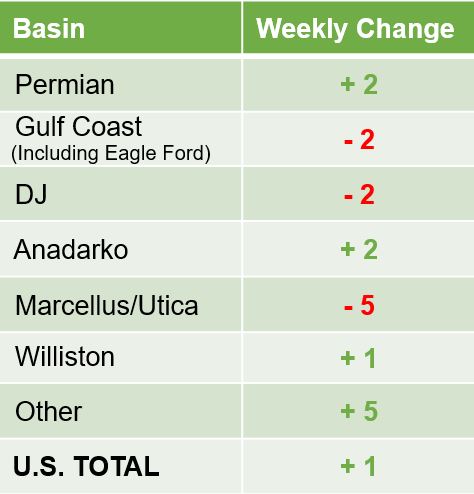 The newest rig count report by Enverus Rig Analytics shows not only a slight increase in national oil and gas rig activity but that Oklahoma energy firms are among some of the most active in the U.S.

Enverus reported the national rig count grew by one to reach 622 as of Sept. 29, a total that is 3% more than last month and 98% higher than one year ago.

Oklahoma’s Anadarko basin also has some of the highest rig increases in the past week. The Anadarko and the Permian Basin each gained two rigs with the Anadarko reaching a total of 58 rigs while the Permian stands at 234.

Enverus reported Appalachia lost the largest number of rigs week over week, dropping five to a total of 43.

Devon Energy and ConocoPhillips are right behind Continental and EOG with 16 rigs each.

Chesapeake Energy and Continental had the largest increase week over week, with each company adding two rigs reported Enverus.

Chesapeake added both rigs in the Gulf Coast, while Continental added one rig each in the Powder River and Williston basins.

Mirada Petroleum dropped both of its rigs in the Appalachian Basin and was the only company to drop more than one rig week over week.