Rig counts grow nationally—especially in the Permian and Appalachia Basins 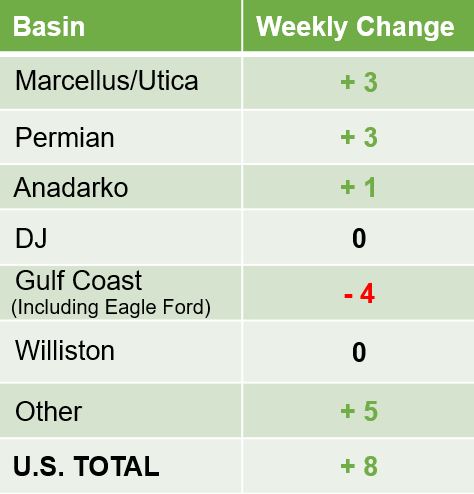 The number of rigs running in the U.S. rose by eight in the last week to a total of 575 as of Aug. 11, according to Enverus Rig Analytics.

The count is up 7% on the month and up 104% on the year. Major plays with the largest week-over-week increases were in Appalachia and the Permian, each gaining three rigs for respective totals of 44 and 230.

When compared to this point in Q2—when 214 Permian rigs were running—there are two notable county-level changes, both in the Midland Basin. There are 14 more rigs running in Martin County, with Endeavor Energy Resources (plus five to seven), Pioneer Natural Resources (plus three to seven) and ExxonMobil (plus three to three) fueling the increase. ConocoPhillips (plus two), Ovintiv (plus two) and Occidental (one) reactivated rigs in the county as well.

Compared to this time in Q2, Midland County has 11 fewer active rigs. Pioneer reduced its Midland count to 10 from 18, and Endeavor Energy Resources went from four rigs to just one.

So far in Q3, the Appalachian rig count has averaged 43, compared to 44 in Q2 and 41 in Q1. Most active as of Aug. 11 are Monroe County, Ohio, and Susquehanna County, Pennsylvania, at four rigs apiece.