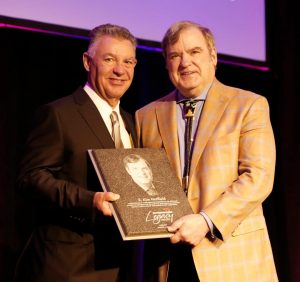 Oklahoma City oilman Kim Hatfield was recently named the inaugural recipient of the Legacy Award given the Oklahoma Petroleum Alliance.

Hatfield is CEO of Oklahoma City’s Crawley Ventures and Crawley Petroleum.  He is a member of the Alliance’s Executive Committee and its Board of Directors.

The Petroleum Alliance Legacy Award is presented to Alliance members in recognition of individual achievement on behalf of the organization and the oil and natural gas industry as a whole. Each chairman of the Alliance may nominate one recipient for the award during the chairman’s two-year term.

“This is the first award ever given by The Petroleum Alliance,” said former Alliance Chairman David Le Norman, who created the award and made the first presentation during the Alliance’s 2021 Annual Meeting. “Kim is a remarkable engineer. He’s a remarkable leader. This award is a culmination of labors that has left a legacy to inspire all of us.”

Hatfield was one of 12 industry leaders who worked together to create The Petroleum Alliance of Oklahoma through the merger of the Oklahoma Independent Petroleum Association (OIPA) and the Oklahoma Oil and Gas Association (OKOGA), creating one organization to represent the entirety of the state’s oil and natural gas industry. As a member of the OIPA board of directors and chairman of its Regulatory Committee, Hatfield led industry efforts to coordinate the state’s response to increased seismicity as a member of Gov. May Fallin’s Coordinating Council on Seismic Activity. The work of Hatfield, other industry representatives, state leaders and regulators from the Oklahoma Corporation Commission led to a 93% decline of seismic events across the state.

“It is truly humbling to be selected for the inaugural Legacy Award,” Hatfield said. “I get credit for a lot of good work done by many others on our committees. Our member companies should encourage their people to get involved in Alliance committees. Instead of reacting to the never-ending flood of regulation and legislation, they can be a force in shaping it. They can make sure our industry’s interests are heard.”

Hatfield joined Crawley Petroleum in 1980, became president in 1985 and was named CEO in 2019. Hatfield is on the board of Crawley Petroleum, Enertia Software, CSP Holdings, CertiPath and Skydex.

Hatfield holds a B.S. in petroleum engineering and an M.S. in petroleum finance from the University of Oklahoma and completed Harvard’s Owner-President Management Program in 1987.