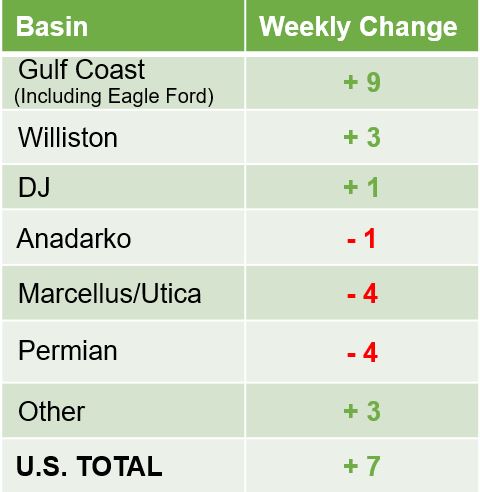 A week after the nation’s rig numbers slipped downward, they bounced back.

Enverus Rig Analytics released its weekly rig count showing an increase of seven to 566 as of Aug. 4.

The number of active rigs is up 5% in the last month and up nearly 99% YOY.

The most active operators in the U.S. are currently Pioneer Natural Resources (23), EOG Resources (18), ConocoPhillips (16) and Mewbourne Oil (16).

The Gulf Coast saw the largest growth week over week, increasing from 58 to 67 rigs. As of Aug. 4, 14 operators had added a rig each in the region, of which 12 had no rigs a week ago, while only five companies dropped a rig. Conoco and EOG continue to lead the Gulf Coast rig count with four units each, followed by Marathon Oil with three.

Appalachia and the Permian both tied for the biggest week-over-week drop, losing four rigs each. In Appalachia, five companies each dropped their only rig in the region, while only one added a rig. Ascent Resources of Oklahoma and Southwestern Energy continue to lead the region with four rigs each.

In the Permian, Pioneer dropped from 27 rigs to 23, and Diamondback Energy dropped from nine to seven. Matador Resources was the only company to add more than one rig, doubling its count from two to four. After Pioneer, the most active Permian operators are Mewbourne with 14 rigs and Oklahoma City-based Devon Energy with 13.