Increase in rig numbers in US including Oklahoma 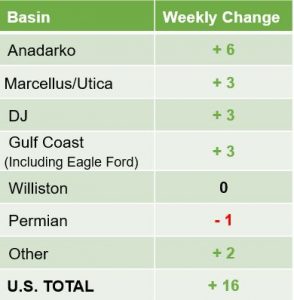 The data-tracking company, Enverus Rig Analytics reported the US rig count jumped by 16 in the past week to 509 as of April 7 including an increase in Oklahoma.

The company said the count grew by 9% in the last month but remains 17% below the count from a year ago.

In the last week, the largest change was in the Anadarko Basin of Oklahoma and Texas where six rigs were added, bringing the total to 28. All additions came from previously inactive companies firing up a rig.