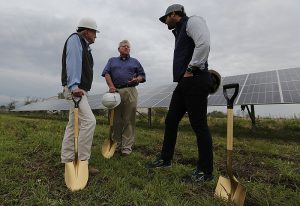 Instead of entering into a power-purchase agreement to get electrical power from a solar operation, the city of England in northwest Arkansas did a land-swap.

In the pioneering new model, England provided 12 acres of land to Little Rock-based Delta Solar, a move in which the land cannot be developed and the city still gets about $5,000 a year in electrical savings reported Northwest Arkansas Democrat Gazette.