Manufacturing shows improvement in Oklahoma and other nearby states 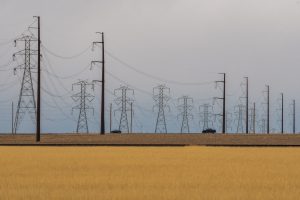 Xcel Energy has started the effort to win approval from Colorado authorities for a $1.7 billion 560 mile transmission line to carry wind and solar electricity from eastern Colorado to the Front Range population centers.

Company officials met this week with Washington County Commissioners in Akron where they hope to get support for the project. They also have to meet with leaders of other counties where the project would be involved.

Xcel filed a plan with state electricity regulators in early March. It involves at least four other utilities hoping to build the line through the service areas of several companies. They are Colorado Springs Utilities, Tri-State Generation and Transmission Association, Black Hills Energy and the Platte River Power Authority.

Xcel filed the proposal with the Colorado Public Utilities Commission which will determine whether the project is needed and in the public interest. If the project is approved, the first segment could possibly be completed by 2025.

Washington County commissioners were told the proposed transmission line is needed to enable 80% renewable power generation for the state. The five segments of the line would connect the Front Range where such cities as Denver and Colorado Springs are located to areas in north central, eastern and southern Colorado.