Will Regan’s EPA be a repeat of Obama policies? 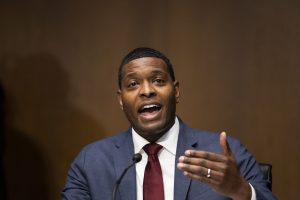 Michael Regan might have won the praise of environmentalists for his work against the oil and gas industry in North Carolina where he headed that state’s environmental department, but he didn’t get the support of Oklahoma U.S. Sens. Jim Inhofe and James Lankford when he was confirmed as head of the Environmental Protection Agency in the Biden administration.

The Senate confirmed him on a 66-34 vote and Senators Inhofe and Lankford were in the “nay” column when the nomination came to the full Senate on Wednesday.

Sen. Inhofe issued a statement indicating he had great respect for Regan but could not support him in good conscience to lead the EPA.

“The Obama-era EPA implemented bad policies that cost Oklahomans jobs and needlessly raised costs on families and businesses with a number of  burdensome regulations,” said the Senator in referring to when Regan used to work at the EPA years ago before taking over the North Carolina Environmental Quality  Department.

The senator said he feared Regan will now likely revisit or “worse, possibly reviving, many of these failed Obama-era policies.”

Inhofe pointed to progress made in the past four years to cut unnecessary regulations and streamline the environmental permitting process.

“Unfortunately, with the confirmation of Secretary Regan today, I fear we are on a path to reverse the progress we have made,” he stated.