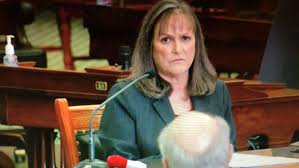 The winter storm that pounded Texas and resulted in deaths and rolling electrical blackouts led to another resignation this week—that of DeAnn Walker who chaired the Public Utilities Commission of Texas.

She resigned under pressure including a call by Texas Lt. Gov. Dan Patrick who not only wanted Walker’s resignation letter but that of ERCOT CEO Bill Magness. He said the two failed to protect the state’s electrical grid.

Walker’s resignation on Monday came after four out-of-state members of the Electric Reliability Council of Texas resigned last week along with the chair and vice chair. She especially was criticized last week when she repeatedly denied being responsible for the disaster.

Even as she quit, Walker claimed in her resignation letter that gas producers, electric generators, even the legislature were to blame—not her.

“I believe others should come forward in dignity and courage and acknowledge how their actions or inactions contributed to the situation. Despite the treatment I received from some legislators, I am proud that I spoke the truth.”