US crude bounces up close to $64 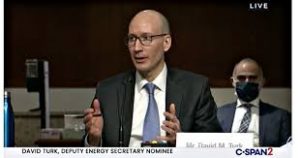 It took Oklahoma U.S. Sen. James Lankford four tries before he could an answer from David Turk, the President’s nominee to be the Deputy Energy Secretary in a discussion about the future of fossil fuel powered vehicles.

During Turk’s confirmation hearing on Thursday before the Senate Energy and Natural Resources Committee, Sen. Lankford asked a simple question—how many years before we don’t have internal combustion vehicles? Will they be with us “this decade–next decade?”

Turk gave a confusing answer before the Senator said he wasn’t trying to be combative—he just wanted an answer.

“Fifteen, 20 years?
“Many many years to come,” finally answered Turk.

Sen. Lankford used the questioning to make a point that Oklahomans and others have concerns that a forced government movement to electric vehicles will especially harm those living in poverty—especially if they are told their gasoline prices “are gonna skyrocket.”

“We can’t make a rapid transition,” explained the Senator. “Folks in my state are very concerned about unrealistic expectations.”

A final question from the Senator.

“Energy independence—is that a national security issue or a national preference issue?”