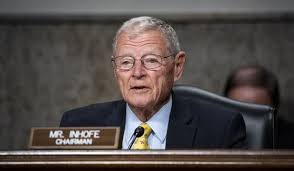 Oklahoma U.S. Sen. Jim Inhofe was among the nine Republicans on the Senate Environment and Public Works Committee who voted Wednesday against two more of President Biden’s environmental nominations.

Inhofe voted against the nomination of Brenda Mallory to be chair of the Council on Environmental Quality and Janet McCabe to be the deputy administrator of the Environmental Protection Agency. The committee vote was 11-9 to send the nominations to the full Senate.

Both also received the support of one Republican, Sen. Lindsey Graham.

Mallory and McCabe were veterans of the Obama administration’s environmental efforts.