Oil and gas rig numbers increased nationally in the past week 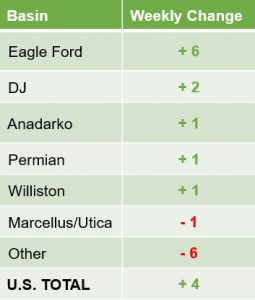 A week after the nation’s oil and gas rig count indicated a loss in the numbers, a new Enverus Rig Analytics report shows an increase of four in the past week to 476.

Enverus said the new figures were as of March 17 and indicated an increase of 5.5% in the past month, but still 41% below numbers from one year ago.

The new report showed the largest increases were in the Gulf Coast and the DJ basin where the numbers increased by two to 15.

In the Gulf Coast, half of the week-over-week increase was in Webb County, Texas, where operators are showing renewed interest in gas windows of the Eagle Ford and Austin Chalk.

SM Energy ramped to two rigs after averaging one rig last year. Cimarex Energy also made an appearance in the data, with one rig drilling a vertical well targeting an unknown formation in the southwest corner of Webb County. The company hasn’t spudded a well in the county since 2011 and has yet to drill a horizontal.

Lewis Energy added the third rig week-over-week after it averaged one over the last five months. Before that, it hadn’t spudding a well in the region since September 2019. Laredo Energy and EOG Resources are also running rigs in Webb County.

In the DJ Basin, Bison Oil & Gas ended its six-month drilling holiday by adding a rig in March. The other addition was due to rig downtime the prior week. The basin is also up by five rigs month over month.