New Mexico to crack down on oil industry venting and flaring

Not so fast with hot weather arriving in Oklahoma 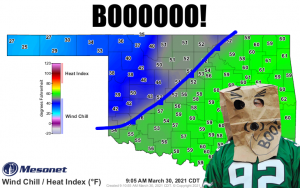 As energy workers in the state wonder when the last of the chilly weather will depart Oklahoma, the Panhandle recorded a Monday high of 88 degrees, the warmest weather so far this year.

Then to confuse the sun worshippers, a freezing temperature was recorded Tuesday morning in Boise City.

“THAT is the Panhandle for ya,” wrote Gary McManus, State Climatologist for the Oklahoma Mesonet.
He said the one good thing about the latest cold front is that it will interact with a “bit of moisture” and “hopefully generate some rainfall for parts of south central Oklahoma.”
It could also generate some severe weather in the state.
A hard freeze was expected Tuesday night in northwestern Oklahoma and a freeze across the northern third of Oklahoma on Thursday.