Nation’s rig numbers increased in the past week 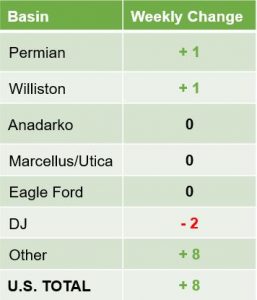 The US rig count rose by eight in the last week to 486 as of March 24, according to Enverus Rig Analytics. The count is up 8% in the last month but still down 38% YOY.

The month-over-month increase of 36 rigs included 31 added in Texas, where 238 rigs are now running, 49% of the US total. More than 60% of the Texas rigs added in the last month went to four counties in the Permian and Eagle Ford.

In the Permian, eight rigs were added in Midland County, pushing its total to 28, and active rigs in Glasscock County doubled to eight.

In South Texas, four additional rigs brought the Webb County tally to six, and three rigs were added in Gonzales County, bringing its total to five.

Notable increases among operators included Pioneer Natural Resources adding six rigs in Midland County to bring its total there to 10, which is also up by three rigs from a year ago. At the same time, Pioneer added two rigs in Glasscock County, returning to an activity level not seen since last April.

ExxonMobil also brought two rigs into Glasscock in the last month; the supermajor hadn’t run a two-rig program in the county since July 2019.

In Gonzales County, EOG added two rigs and is now running three, and Marathon added a rig for the first time since last May.