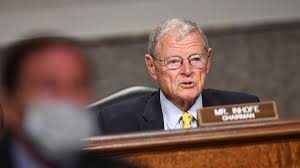 Oklahoma U.S. Sen. Jim Inhofe made the case for fuel diversity in addressing the nation’s climate change issues in the electricity sector.

He did so during a hearing this week by the Senate Environment and Public Works Committee where he once was chairman and now is a senior member.

The hearing was entitled : Building Back Better: Addressing Climate Change in the Electricity Sector and Fostering Economic Growth.

In his questioning of some of the witnesses, the Senator pointed out how natural gas and coal were able to maintain sufficient electrical power during the February winter storm that resulted in rolling blackouts of electricity.

Inhofe: Mr. Fowke, we had problems throughout the country during this cold spell that we had. In fact, in my state of Oklahoma, it was the coldest it’s been since 1878. That is something we had not experienced before, but we handled real well. If you look at our neighbor down there in Texas, they had outages. They had all those problems; we didn’t have those problems. I have to say that it was coal that saved the day. Normally, coal is about 10 percent of our mix, and we had to use that up to 40 percent — and that’s the reason we didn’t have the problems that some of the other states did. I think that speaks to your concern about the fuel diversity and how important that is. Now, I would say if our grids were operating on renewables alone during that storm, what would that have looked like? Would it have been more outages or less?

Fowke: Well, I don’t think the big grid can operate on renewables alone. I think it does need to be backed up, Senator. I think, increasingly, the nation is moving away from coal, and towards natural gas. But we have to have better coordination between the power sector and the gas sector because the interdependencies are not getting less; they’re getting greater. So, we also have some coal. We have some natural gas and all of those — our plants worked; they were ready to go. So, I think it can be done without coal, but we are going to have a dispatchable resource, and I think that is natural gas.

Inhofe: Well, my point is the diversity. That’s what saved us in the state of Oklahoma. Also the statement, when you said it in your opening remarks, we wrote it down because I liked the way you said it. You said, “for the next two decades, at least, natural gas and nuclear do not stand in the way of the industry’s clean energy transition; they make it possible.” That’s a great statement. I would like to ask Ms. Snyder, do you agree with this statement?

Snyder: Yes, I absolutely do. Natural gas is foundational to our energy system, and I think it will play a very key role in addressing climate change.

Around one-third of electricity is generated using natural gas right now and our system is extremely reliable. Looking at a survey of the INGAA members, which are the Interstate Natural Gas Pipelines, over a 10 year span, they were able to meet their firm contractual commitments 99.79 percent of the time. So, we know how important that reliability is and we’re looking forward to the future to expand in the availability of natural gas, complimenting renewables as well as transporting lower carbon fuels.

Inhofe: Well that is good and I appreciate that very much.

One thing I wanted to get into and I think there is time now, Ms. Snyder, to address this, and that is the NEPA permitting reform. In the previous Administration, of course there is a lot of criticism of our previous president on their feelings about the reforms. I’ve always felt anything that takes five years can be done in two years. At that time, they were talking about the Council on Environmental Quality, found the average time to complete the environmental impact statement was four and a half years — which I felt was far too long. Now, the president at that time said we can do it in two years. So, we made some reforms there and I’d like to have your opinion. Do you think that the improvements that were made during that time served to our advantage in NEPA reform?

Snyder: Yes, I do. NEPA is the most litigated environmental statute out there. As you said, it takes some time in order to complete these environmental reviews. These environmental reviews are necessary before our infrastructures in the interstate pipeline industry can move forward and before FERC will issue a certificate in order for it to operate. But, many different federal agencies are involved and I think that programs such as the One Federal Decision are just commonsense to try to get the federal family to work together, cooperate, share information and work based upon a timeline.

Inhofe: Yes. Well, I agree with that and I think that a lot of people are not aware of the fact that it’s not just gas — the wind industry also supported those reforms. I think most all suppliers benefited from those reforms.

Thank you very much, Mr. Chairman.