GOP Senator to vote for Haaland as Interior Secretary 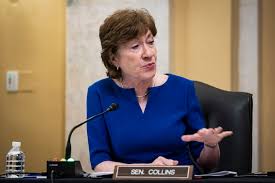 She is the first Republican senator to come out publicly in support of President Biden’s nominee.

“After examining Representative Deb Haaland’s qualifications, reviewing her hearing before the Senate Energy and Natural Resources Committee, and meeting with her personally, I will vote to confirm her to be the Secretary of the Department of the Interior,” Collins said in a Wednesday statement.

The Senate Energy and Natural Resources Committee will vote Thursday and Haaland’s nomination is expected to advance to the full senate.

“Her role in helping to shepherd the Great American Outdoors Act through the House will be beneficial to the Department’s implementation of this landmark conservation law, which I cosponsored,” Collins said. “I also appreciate Representative Haaland’s willingness to support issues important to the State of Maine, such as Acadia National Park, as well as her deep knowledge of tribal issues, which has earned her the support of tribes across the country, including those in Maine.”

But Haaland’s views are considered too radical for other Republicans on the Committee.

“—Rep. Haaland’s legislative record and testimony demonstrate her commitment to an unrealistic energy reality. I cannot support her nomination to serve as the Secretary of the Interior,” said Sen. Lankford in announcing his opposition last week.