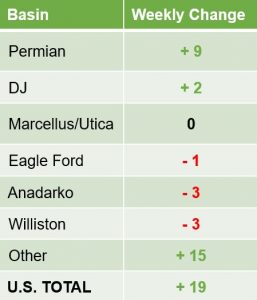 Oil and gas drilling operations in Oklahoma reportedly fell in the past week but a new report by the Austin-based Enverus Rig Analytics showed a total U.S. rig count increase of 19 as of this week.

The company reported the increase put the rig count at 468, an increase of nearly 5% over the past month. However, compared to a year ago, the numbers are still down 43%.

Oklahoma City’s Devon Energy is still one of the most-active operators across the country with 17 rigs in operation. EOG Resources based in Houston, a firm with extensive operations in Oklahoma leads the nation with 22 rigs followed by Pioneer Natural Resources at 21.

Occidental Petroleum has 15 and ConocoPhillips has 14 rigs in operation, according to the report by Enverus.

It is no surprise that the Permian Basin in West Texas and Southeast New Mexico saw the largest increase with nine more rigs compared to a week ago.
Pioneer increased its numbers to 21 as of March 3 while Centennial Resource Development added more rigs to reach a total of four in the Permian.

The Haynesville saw a five-rig increase to 43, with Aethon Energy’s two-rig increase to a total of seven leading the way. The DJ Basin also rose by two rigs to 14 over the last week. The Anadarko, Appalachian, Gulf Coast and Williston basins all were flat or lost rigs.