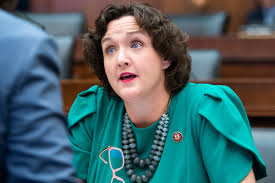 Critics of the oil and gas industry are lauding over California Democratic Congresswoman Katie Porter and her firey response to an oil industry spokesman’s claims that the industry doesn’t receive tax breaks.

It happened Tuesday during a hearing of the House Natural Resources subcommittee that Porter chairs. Porter, known for her stance against the oil and gas industry held a hearing where an oil company executive testified, claiming his industry doesn’t get any special tax breaks.