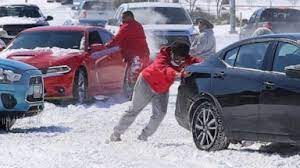 The three top Republicans on the House Energy and Commerce Committee are asking Democrats in control of the committee not to single out Texas and its power crisis over the February winter storm.

If they get their wish, Oklahoma and other states also hit hard by the storm could fall under examination how they handled the power supply challenges.

POLITICO reported that Rep. Cathy McMorris Rodgers of Washington was joined by Rep. Fred Upton of Michigan and Rep. Morgan Griffith of Virginia in sending a letter to committee chairman Re. Frank Pallone. In it, the three asked him to widen his probe of the power failures.

“It is imperative that we address the energy emergency events that millions of Americans have had to face — not only in Texas, but in California, Louisiana, Oklahoma, and Arkansas,” they wrote.

They also noted that rolling blackouts that ravaged California in recent years have not been included in the Democrats’ targeted investigation.

Oklahoma Congressman Markwayne Mullin also is a member of the committee.

The Democrats in control of the committee did not respond. Their hearing into the Texas crisis will be held March 24.