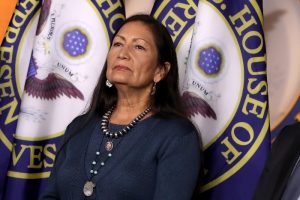 As New Mexico U.S. Rep. Deb Haaland goes before Sen. James Lankford and others on the Senate Energy and Natural Resources Committee on Tuesday, Native American tribes are turning opposition to her nomination to be Interior Secretary into a racial and sexist issue.

Several Republican Senators came out against the nomination because of what they called “”extreme views” on fossil fuels and use of federal lands. But tribes support Haaland because she is a Native American who boasts of being a 35th generation Puebloan.

Oklahoma Sen. Lankford had yet to decide whether he would support Haaland’s nomination according to a senior aide who communicated last week with OK Energy Today. Oklahoma’s 26 Indian tribes have lobbied Lankford and Sen. Jim Inhofe for their support but neither had taken a public stand to date.

The GOP Senators who oppose Haaland’s nomination are being accused of racism rather than for their publicly-stated views on the congresswoman’s political and environmental opinions.

POLITICO reported that several Native Americans told its reporters that the opposition reminds them of “stereotyping” and dismissiveness tribes have long experienced with the federal government.

“Her supporters add she’s facing a level of criticism above and beyond the normal fiery political rhetoric,” reported the capitol news site.

Montana U.S. Steve Daines whose constituency includes a large Native American population, opposes Haaland and an aide says his opposition came after meeting in person with the Democratic congresswoman.

“This is about the Congresswoman’s radical views that are completely out of touch with Montana and the nation,” stated the aide.

Sen. Cynthia Lummis of Wyoming felt the same, according to one of her aides “for one reason and one reason only: her radical statements and positions on lands and energy issues.”