Governors to Biden—-pause the pause 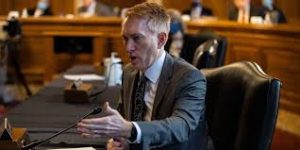 Oklahoma U.S. Sen. James Lankford says he won’t support Democratic U.S. Rep. Deb Haaland of New Mexico in her nomination by President Biden to be his Secretary of Interior.

His decision was announced after Haaland underwent a second round of questioning by members of the Senate Energy and Natural Resources Committee of which Lankford is a member.

Following the conclusion of the hearing, Lankford announced that he does not plan to support Rep. Haaland’s nomination:

“Oklahomans need the Secretary of the Interior to advocate for reliable base power,” said the senator in a statement released by his office.

He said the nation wants clean air, water and land but last week, Oklahoma and other states experienced the consequences of losing any element of “our all-of-the-above energy strategy.”

“—Rep. Haaland’s legislative record and testimony demonstrate her commitment to an unrealistic energy reality. I cannot support her nomination to serve as the Secretary of the Interior.” 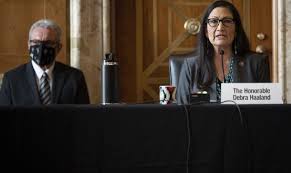 During his second round of questions, Sen. Lankford attempted to get an answer from Haaland whether pipeline operators should face the loss of existing rights of way by the Interior Department. He pressed her four different times before she finally said,

“Again, Senator, I can’t answer that question because I don’t know what the answer is, but if I am confirmed of course—it’s important to you—I would be happy to speak with you,” said Haaland.

To which Lankford responded, “It’s actually important to every American that wants to stay warm in the winter, and for everyone that flies in a plane or drives a car it becomes a pretty important issue because if we lose access to pipelines that are already in the ground that go through federal lands or have right-of-way, we lose access.”

He wasn’t finished and asked Rep. Haaland if she believes truck and train traffic is safer than a pipeline in moving energy.

“Again, I wish I could answer that question. I don’t know what the answer is, Senator. I haven’t seen those statistics.”

“I would go ahead and tell you that it’s safer and less expensive to be able to move it in a pipeline than it is on truck traffic or in train traffic,” added the Senator.

He spent the remainder of his second round of questions focused on endangered species including the American Burying Beetle found in Oklahoma.

The Senator wondered whether Rep. Haaland agreed with the BIA’s decision that the beetle should be protected for another 50 years because it might be affected by a change in global temperatures.

Haaland answered that she would “work with scientists.”

Other Republicans continued grilling Haaland about her controversial statements in the past to end fracking and oil and gas development in her home state of New Mexico.

Sen. John Barrasso of Wyoming, the ranking Republican pressed Haaland on her 2018 statements to eliminate oil and gas and make up the revenue to “legalize cannabis”

“Your preference is to turn to drugs – is what you’ve recommended to the voters – at a time when we know there is high unemployment and energy workers lose their jobs. “We’ve seen it in West Virginia, we’ve seen it around the country. There’s been an opioid crisis in this nation, and yet what I hear from you is the answer in a ‘better choice’ world is marijuana.”

While some of the senators bore down on Haaland’s anti-oil and gas comments in the past, her supporters including Native American tribes in Oklahoma and across other states stress her confirmation would make her the first Native American Interior Secretary.

Some accused the Senators of politicizing Haaland’s nomination.

The Native News Online quoted Crystal Echo Hawk, founder and executive director IllumiNative as saying, “Listening to this morning’s confirmation hearing, there is a clear concerted effort from the Republican Senators to politicize the position and Deb Haaland’s confirmation.”