Haaland deflects pointed questions about her opposition to fossil fuels 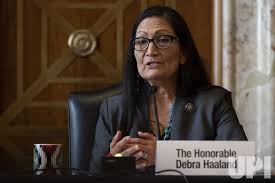 While New Mexico Democratic congresswoman Deb Haaland told Senators  during her confirmation hearing on Tuesday that she would respect the importance of fossil fuel production as Interior secretary, she avoided pointed questions about her public opposition to fracking and oil and gas and fossil fuels.

Haaland went before members of the Senate Energy and Natural Resources Committee.

“As I’ve learned in this role, there’s no question that fossil energy does and will continue to play a major role in America for years to come,” Haaland said in her opening statement. “I know how important oil and gas revenues are to critical services. But we must also recognize that the energy industry is innovating, and our climate challenge must be addressed.”

Time and time again, she reflected direct questions, responding by saying she would follow “President Biden’s agenda,” or “I would be happy to look at the issue Senator.”

When asked about her past comments to ban fracking and whether she intended to carry out such a ban if she were Interior Secretary, she answered, “President Biden doesn’t support a ban and I serve at the pleasure of the president.”

When asked for her personal opinions and recommendations, she repeated the answer of deferring to the President’s agenda. 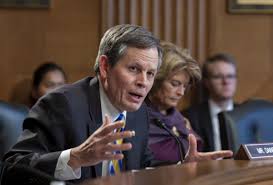 Montana Republican Sen. Steve Daines focused on Haaland’s attacks on oil and gas and even efforts to offer “protection in perpetuity” to grizzly bears in his state.

“Why would you sponsor legislation like that when science tells us the bear population is well above the recovery target?” he asked.

“I imagine at the time I was caring about the bears,” she answered.

After his first round of questions, Daines told the committee he still has serious concerns about the nomination of Haaland. He had earlier stated he would work to block the nomination because of what he called “several radical issues.” 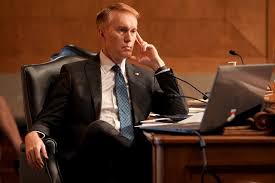 Oklahoma U.S. Sen. James Lankford also questioned Haaland, focusing on any decisions she might make regarding tribal lands and public lands—would they be different?

He used the Osage Council of Osage County in Oklahoma which controls oil and gas well operations. Lankford pointed out it’s a significant portion of income for the tribe which complained it had gone through 7 years of devastation brought on by onerous BIA regulations.

When asked what her standards would be for oil and gas operations on tribal lands, she said they should be able to move forward with them. But the Senator wanted to know if the rules “in the days ahead” will be different on tribal lands compared to public lands. He apparently suggested that with her opposition to fracking in the past, would she oppose fracking if it were on tribal lands?

“I would take all these things into consideration and of course would look forward to consulting with you,” answered Rep. Haaland.

“But would your recommendations be that there is a unique difference between tribal management of their mineral rights, oil and gas and fracking than on federal land?”

“Senator, I would be happy to look at the issue. to study it then if I’m confirmed and speak with you about it,” she responded.

Sen. Lankford had yet to announce publicly whether he would support her nomination.

Round two of the questions is set for Wednesday, Feb. 24 at 9 a.m. central time.