After gloomy 4Q report, NOV chairman is optimistic about 2021 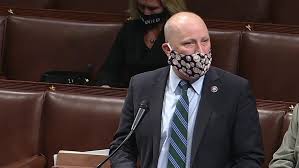 “Come and take it” challenged Texas Rep. Chip Roy in a Friday speech on the House floor as he attacked Democrats and the Biden administration over their war against the oil and natural gas industry.

The Republican Congressman accused Democrats of attacking the natural resources that are “the very great strength that the United States of America has to set us apart from the rest of the world to be independent.”

His ‘come and take it’ dare was similar to the phrase “molṑn labé” , the ancient Greek phrase labeled on grips of some popular pistols. It is considered a classical expression of defiance.

Rep. Roy went after Biden and accused him of “want[ing] to come in and destroy jobs, destroy our leadership in the world, turn us over to Russia and Iran, and oh by the way, empower China to roll right over us while they spew out whatever they want to spew out because darn if they’re going to actually do anything like agree to whatever is in the Paris agreement.”

He wasn’t finished as he continued with his fiery rhetoric.

“It is an absolute joke, it’s a laughingstock what the Democratic Party is doing saying they’re standing up for the little guy in this country, when you’re going to drive up the price of energy, increase CO2, empower China, empower Iran, empower Russia, and harm jobs.”

“You’re going to kill hundreds of thousands of jobs in this country even as we’re coming out of the negative effect of the pandemic,” he continued.

The congressman made a pointed and final challenge to the Democrats who control the House.

“You roll in here thinking that we’re going to just fundamentally alter our entire economy through executive order?