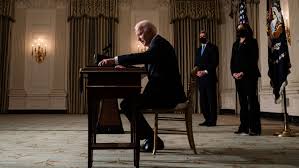 The oil and gas industry didn’t have to wait long before getting hit by President Biden’s orders suspending new leases for fracking and oil drilling on federal lands and waters.

The action he took Wednesday at the White House drew immediate rebukes from the industry as well as members of congress from oil and natural gas-producing states.

His order not only suspended new exploration but the President said he will ask Congress to eliminate subsidies for fossil fuel companies, a request that will likely draw heated debate from Oklahoma, Texas and some New Mexico representatives in the House.

His order also will require the Interior Department to start a review of existing permits for fossil fuel development, including those likely held by Oklahoma’s Devon Energy, one of the largest holders of permits on federal lands in New Mexico.

How did the market react on Wednesday?

One analytical group, Seeking Alpha reported energy companies have been selling off in recent days, perhaps in anticipation of the job-killing move by Biden. Devon, EOG Resources and ConocoPhillips were among them because they have heavier federal leases exposure.

Seeking Alpha suggested that if there is one positive note—it is that the suspension of new drilling on federal land will apply the brakes to U.S. production growth, thereby possibly increasing the price of global oil by as much as $5 a barrel.

But—there’s always a but. Oilfield service companies such as Halliburton, Baker Hughes, Schlumberger—all firms with major operations in Oklahoma, Texas and New Mexico will be, as Seeking Alpha put it, “babies thrown out with the bath water.”