OCC website to be down for a few hours on Tuesday 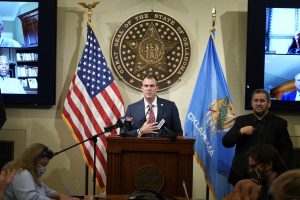 Oklahoma Gov. Kevin Stitt wants to hold talks with Indian leaders to discuss how to proceed from last summer’s US Supreme Court ruling that in essence gave enforcement and regulatory authority to Indian Tribes covering nearly half of the state.

“Now is the time to roll up our sleeves to resolve the issues raised by McGirt in a manner consistent with the best interests of all Oklahomans,” the governor said in announcing his call for talks about who has jurisdiction stemming from the McGirt decision.

The governor asked leaders of the Five Civilized Tribes to enter into formal negotiations with the state to discuss issues from the ruling.

“As the commonly-elected Governor for all 4 million Oklahomans, it is critically important that the State of Oklahoma and the leaders of Oklahoma’s tribes impacted by the McGirt decision begin negotiations, in earnest, to resolve the potential ramifications of this ruling,” said Gov. Stitt.

He named Ryan Leonard, Special Counsel for Native America Affairs to be the state’s lead negotiator.

“As things stand today, crimes are going unpunished, and convicted criminals are seeking to be set free. We can’t allow this to happen,” added the governor.

While the supreme court ruling focused on a criminal case, the regulatory authority over oil and gas and other energy matters remains unanswered by the courts.

“As both an Oklahoman and a citizen of the Cherokee Nation, my response to those suggestions is that Oklahoma’s future success is dependent upon our common values of certainty, fairness and unity being embraced by all. Working together is how we make Oklahoma a Top Ten state.”