Nebraska ethanol plant called a danger to a nearby town 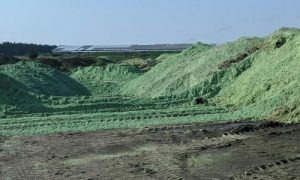 A Nebraska ethanol plant is now being called a danger to a nearby community because of the pesticide-treated seeds it included in the making of the biofuel.

The AltEn plant is located at Mead, Nebraska, a town of about 500 not far from Omaha. Its use of the seeds coated with fungicides and insecticides reportedly resulted not only in a pile of byproduct it cannot use but medical issues among residents of Mead—eye and throat irritation, nosebleeds, dying colonies of bees, birds and butterflies that appeared disoriented and staggering sick dogs according to a report by The Guardian.