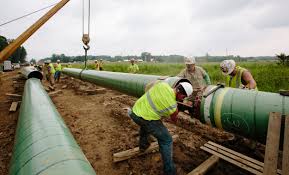 Hundreds of workers on the Keystone XL pipeline have reportedly already lost their jobs because of President Biden’s cancellation of the permit allowing the line to be built in Montana, South Dakota and Nebraska.

The Republican National Committee made a Twitter post this week with a video of a Keystone XL general manager announcing the layoffs, most of whom are said to be in Wisconsin.