Oklahoma’s rig numbers dropped while US increased in past week 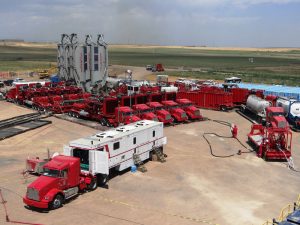 The Houston-based company said the new kind of fracturing was done on several pads for Cimarex Energy Company in the Permian Basin and started in November. The Denver-based company not only has been active in Oklahoma but also in Texas.

Halliburton explained that as of the announcement date, it had completed nearly 340 stages across multiple wells using utility-powered electric frac pumps and they “demonstrated consistent superior performance.”

The company pointed out the grid-powered electric fracturing offers an alternative path to achieving the lowest emissions profile possible compared to both turbines and Tier 4 dual fuel engines. The process also requires a lower capital outlay compared to turbines. 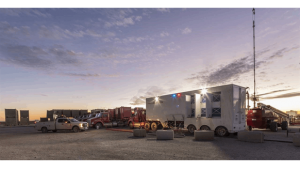 “Electric fracturing aligns with our goal to provide the industry with lower-carbon intensive solutions and our commitment to a sustainable energy future,” said Michael Segura, vice president of Production Enhancement for Halliburton.

“With Halliburton’s leading electric fracturing capabilities, coupled with an innovative operator like Cimarex, grid power can offer one of the most effective and capital efficient solutions for electric fracturing,” he added.
Halliburton’s electric-powered equipment is engineered to utilize the maximum power potential from the grid, allowing the customer to achieve pumping performance of 30 to 40 percent higher than with conventional equipment.

He said the the deployment of the electric frac system upholds Cimarex’s aim toward its operational and environmental performance.
Source: Halliburton press release